Mexico Is Easy, Affordable & Delicious. Here’s Where to Go.

Why Mexico Is the Best Destination for Food-Lovers

For one thing, Mexico’s culinary traditions are vast and varied, with nearly every region of the country producing its own signature dishes. You could spend a lifetime eating your way across Mexico and it wouldn’t be enough time to sample the country’s full repertoire of recipes. Regions and restaurants alike consistently earn global recognition, from UNESCO World Heritage status for its culinary traditions to Latin America’s and World’s 50 Best Restaurant status.

There’s also tequila. And wine and beer, too — but mostly tequila. You haven’t had really good tequila until you’ve been to Mexico.

Mexico is budget-friendly, too. U.S. dollars go far in Mexico these days; at about 18.5 pesos to a dollar, the past year has meant major deals for Americans who want to visit. In short: That splurge on a five-star hotel or on a multi-course meal isn’t likely to induce a lick of guilt, especially in the summer, when it’s off-peak season.

Finally, Mexico really does have something for everyone — whether it’s your first time or your tenth, if you want to eat at the country’s most applauded restaurants or if you’re after something more adventurous (like bugs!).

The 5 Best Destinations in Mexico for Food-Lovers

If it’s your first time in Mexico …

Where to go: Los Cabos and the Baja California Peninsula

Why you should go: Yes, Los Cabos — the sister town of San José del Cabo and Cabo San Lucas — is an expat, tourist magnet, but visit and you’ll see that (a) it’s with good reason and (b) it’s easy enough to veer off the tourist track, dipping into the Baja California Peninsula’s pueblos mágicos, or magical towns.

If you love street food stalls and fancy restaurants

Where to go: Mexico City

Why you should go: Mexico City, the country’s capital, deserves practically every single superlative — good and bad — that’s ever been applied to it. Yes, it’s chaotic. Yes, it’s loud. Yes, it’s overwhelming. And yes, it is also an absolute hotbed of cultural inventiveness and greatness, and it is at the table that this is most evident. For food-lovers, the Mexican capital is a must-visit because that culinary prowess is evident at every price point. From the humble street stall or market stand to the white-tablecloth restaurant, Mexico City is a food-lover’s fever dream.

If you want to take a swim before dinner every night …

Where to go: Tulum

Why you should go: Mexico’s Yucatán Peninsula is a cultural and culinary delight, but most visitors don’t make it beyond Cancún or Tulum. And that’s okay (seriously: no judgement) because in the past five to 10 years, Tulum has come into its own as a legit food-lover’s destination. The area is also known for its cenotes, natural swimming holes in the limestone bedrock (see photo).

Getting around: The best way to navigate the four-mile stretch that runs along the beach? By bike! There are a number of outlets offering rentals by the half-day, day, or longer.

If what you drink is as important as what you eat …

Where to go: Guadalajara and Tequila, Jalisco

Why you should go: If you’re as much a connoisseur of libations as you are of food, then the state of Jalisco is the ideal starting point for your explorations in Mexico. Jalisco is home to Guadalajara, the birthplace of mariachi (and, locals will tell you, the messy but delicious torta ahogada sandwich and the gamey stew known as birria), as well as the UNESCO-recognized town of Tequila, which is the birthplace of, you guessed it, the spirit that’s most often associated with our southern neighbor.

Where to eat: In Guadalajara, enjoy the eclectic, delicious restaurant and cultural scene for a few days. Magno Brassserie is one must-try, and the torta ahogadas at Clements are rightly famous.

What to do: From Guadalajara, take the José Cuervo Tequila Express train (book the first-class car!) to Tequila. Along the two-and-a-half-hour route, you’ll learn all about the art and science of Mexico’s favorite spirit, and when you disembark in the town, you’ll be whisked off to see the agave fields from which tequila is sourced. You can then transfer to the town itself for a tour of José Cuervo or other local factories.

If you want to get a jump on the insect trend …

Where to go: Oaxaca or Puebla

Why you should go: If the apocalypse is upon us, you want to be ready, right? Consider a visit to Oaxaca or Puebla preparatory research. These two cradles of Mexican cuisine are both known for their mole (that complex dish with multiple spices), as well as their edible insects.

What to eat in Oaxaca: Chapulines, or grasshoppers, find their way into a number of Oaxacan dishes, including as a garnish for tacos. The insects are light and airy, not unlike popcorn, and are in season from early spring until late fall. You can find them on the menus of any number of restaurants, but also at unnamed market stalls. Need someone to guide you through the culinary world of insects? Book a table at Casa Oaxaca, where chapulines are served in guacamole and other dishes.

What to eat in Puebla: In Puebla, you’ll want to ask for a dish with escamoles, or ant eggs, which are sometimes referred to as Mexican caviar. You’ll want to book a table at top-ranked El Mural de los Poblanos, which specializes in traditional Pueblan fare, to try this delicacy.

There are many misconceptions about Mexican food: many people think that it’s just tacos, burritos and re-fried beans, but that’s just the start of what Mexico has to offer. Mexico’s food offerings are in fact incredibly diverse and vary greatly from place to place. Here are some of the country’s best destinations for foodies and some of the dishes you shouldn’t miss in each location.

Oaxaca has long been known as a culinary destination. This is one of the states with the most biodiversity and it’s also very culturally diverse, with 16 different ethnolinguistic groups. This diversity is also present in the cuisine, with a great variety of foods to try, from the fried grasshoppers known as chapulines to the giant prepared tortillas known as tlayudas. This destination should be on any foodie’s list of places not to miss.
Dishes to try: mole, tlayudas, quesillo, tamales, chapulines

During the colonial period, nuns from the convents of Santa Rosa and Santa Monica invented the recipes for some of the dishes for which Puebla is famous. The creative nuns made use of a blend of European and Mexican ingredients in order to create mole poblano and chiles en nogada, two of the city’s signature dishes. Besides sampling these, foodies visiting Puebla ahould take a stroll down la calle de los dulces “candy street,” to try some of Puebla’s traditional sweets.
Dishes to try: chiles en nogada, dulces de camote, mole poblano, cemitas, chalupas

When UNESCO designated traditional Mexican cuisine as part of the

intangible cultural heritage of humanity, the state of Michoacan got a special mention for its traditional culinary practices. Michoacan’s capital city, Morelia, is a perfect place from which to explore the region.

As one of the largest cities in the world, it comes as no surprise that Mexico City has a great variety of food vendors and restaurants to choose from. In this city, you’re likely to find examples of the cuisines of the different regions of Mexico, but also some dishes to which chilangos are especially partial. A street food tour is a great way to try some of the local delights if you’re intimidated by the array of choices available.

Merida, the capital of Yucatan state, is an excellent spot to sample Yucatecan cuisine. This is one of Mexico’s most distinctive cuisines, the result of a combination of Mayan and European ingredients and techniques. The fact that this area developed in relative isolation from the rest of the country accounts for this area’s different flavors.
Dishes to try: cochinita pibil, sopa de lima, queso relleno, papadzules.

Puerto Vallarta is fast gaining a reputation as a gourmet destination. The delectable choices run the gamut from taco stands on the beach to fancy white tablecloth restaurants. Dedicated foodies will want to time their visit to coincide with either the Puerto Vallarta Gourmet Festival held each November or Restaurant Week in May, but you can take a taco tour with Vallarta Food Tours anytime you visit. 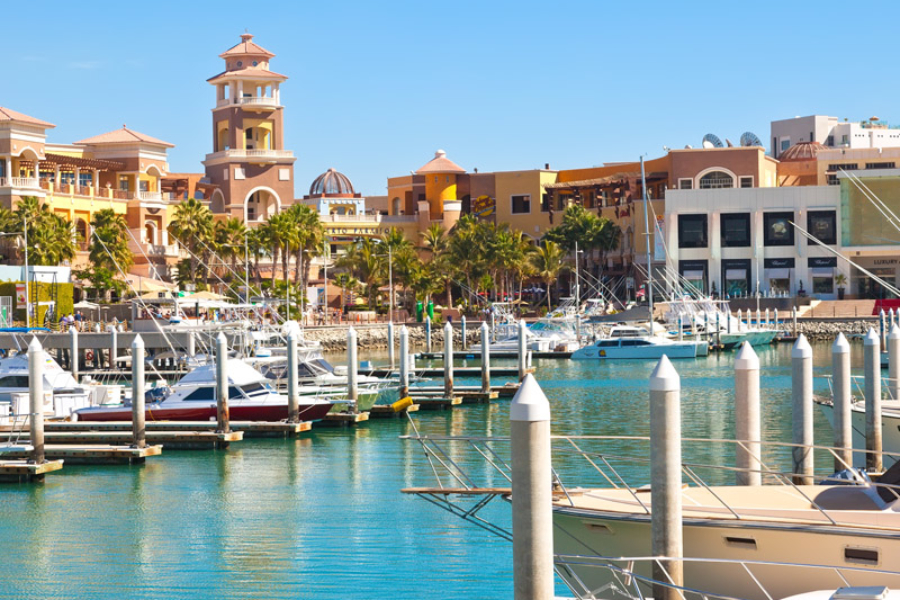 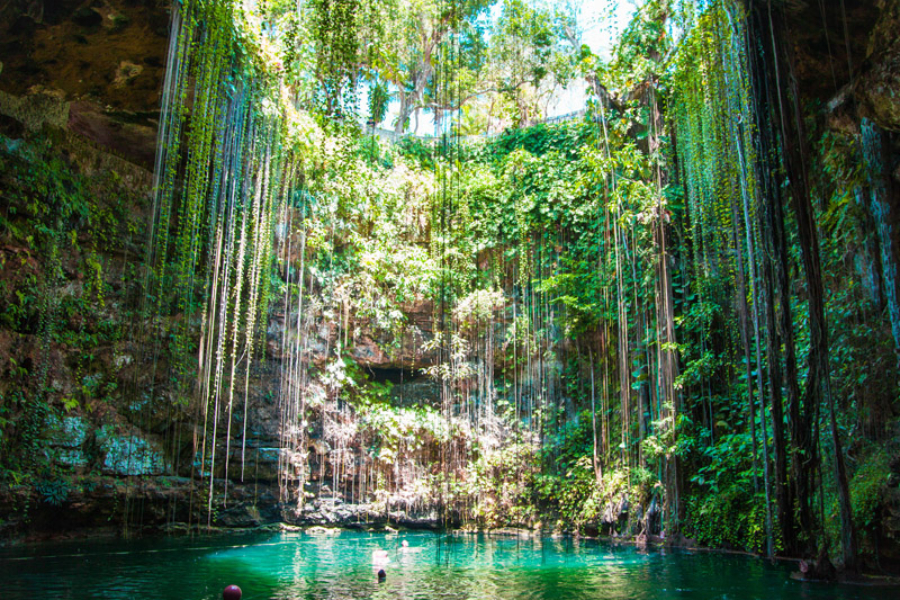 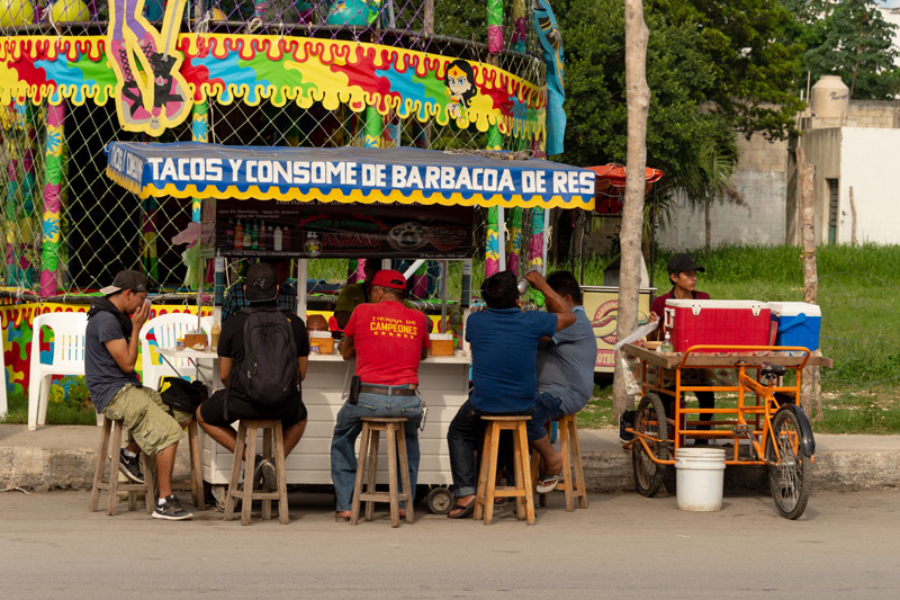 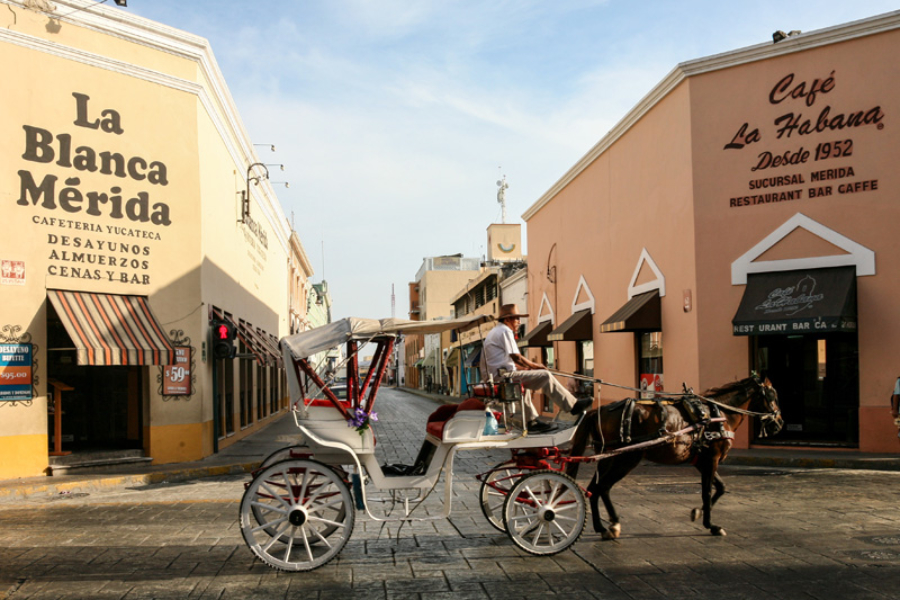 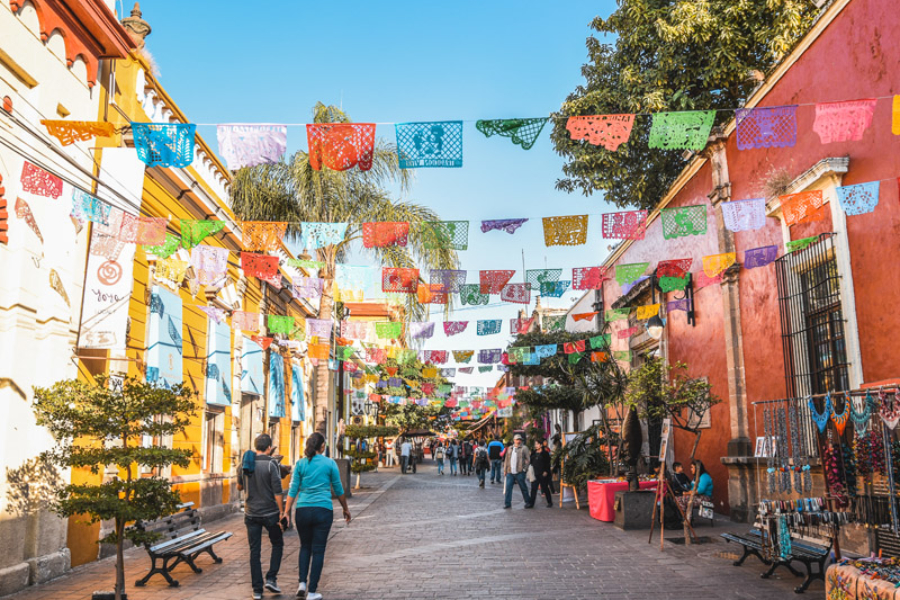 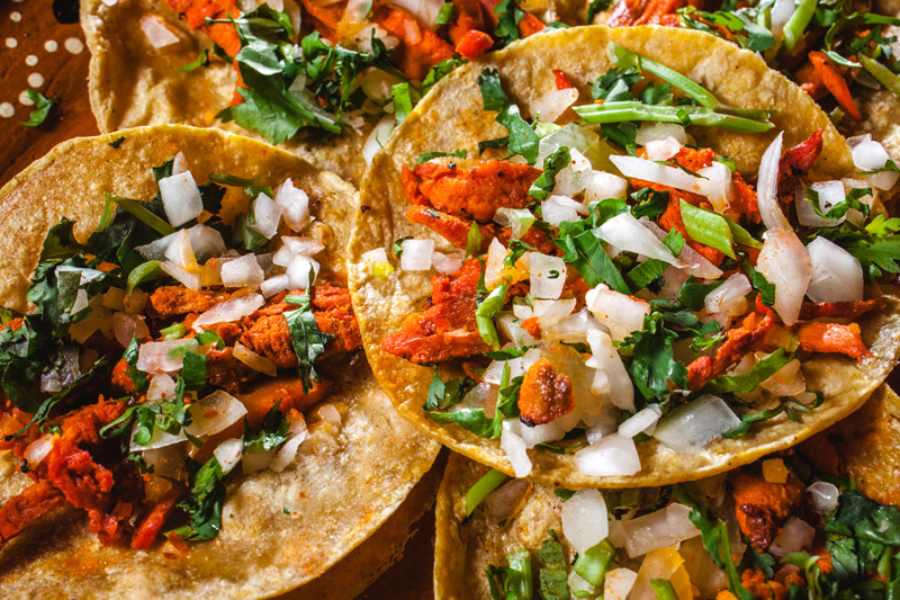 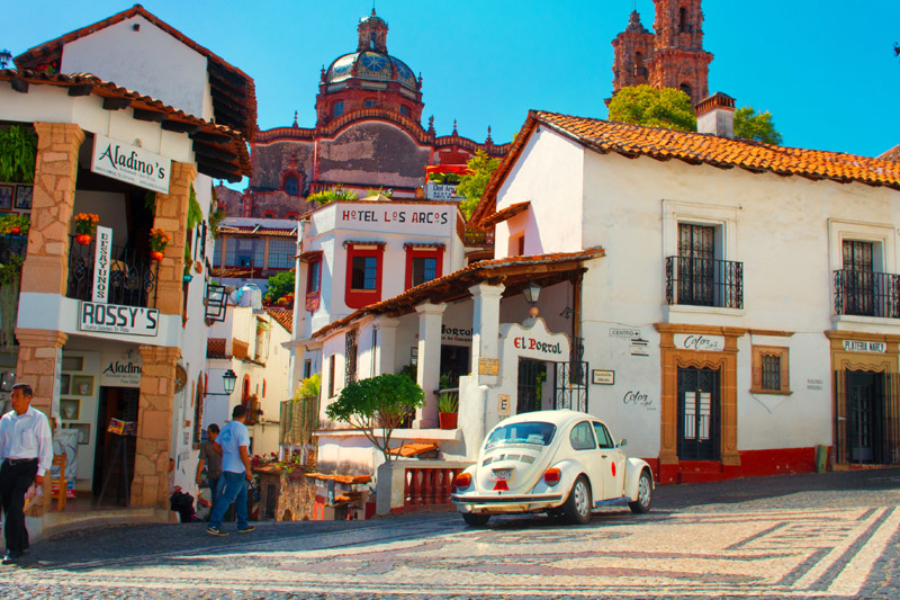 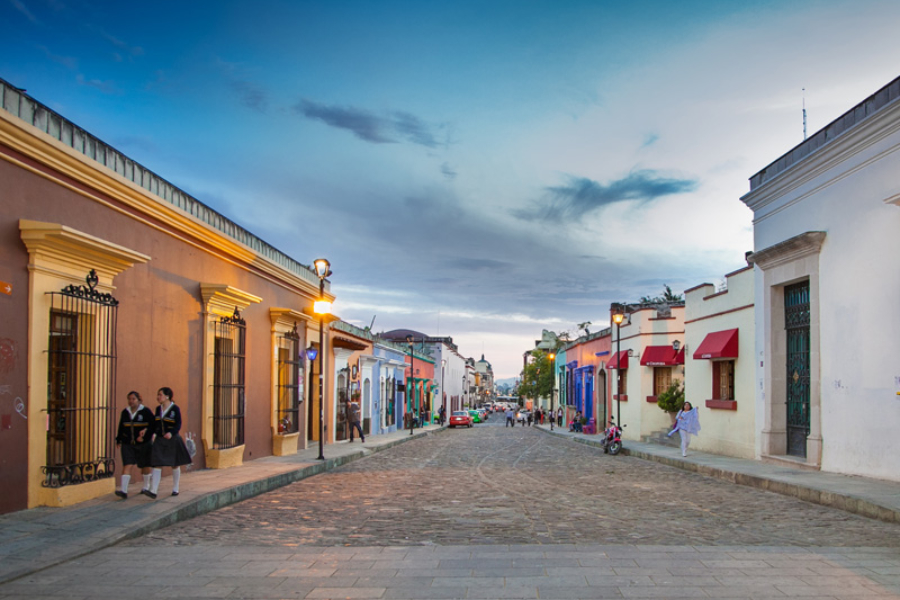