Start in Addis Ababa and end in Lalibela! With the discovery tour Incredible Ethiopia, you have a 13 day tour package taking you from Addis Ababa to Lalibela and through Addis Ababa, Ethiopia and 9 other destinations in Ethiopia. Incredible Ethiopia is a small group tour that includes accommodation in a hotel as well as flights, an expert guide, meals, transport and more.

Travel to Ethiopia and discover a beautiful country, barely touched by modern society. It’s an incredible combination of history, tradition, culture and nature. From 3 million-year-old fossilised hominid remains in Addis Ababa to the amazing rock-hewn churches, hidden crypts and grottoes in Lalibela, this trip take you deep into human history. The 500-year-old monastery islands of Bahir Dar, the elegant castles of Gondar, the majestic geological formations of the Simien mountains, the giant obelisks that rise out of Axum, and even the rumoured home of the Ark of the Covenant. This 13 day trip travels through the north of the country, taking in views of the Blue Nile and trekking to the peaks of the Simien Mountains (meeting red-chested Gelada baboons). You’ll be sure to taste the country’s famous coffee and delectable cuisine, and meet the genuine and friendly people along the way.

Day 1: Addis Ababa
Begin this adventure in the capital of Addis Ababa. Your adventure begins with a welcome meeting at 6 pm. You can arrive at any time as there are no activities planned until this important meeting. This relatively new city, established by the Emperor Menelik II in 1887, is one of contrasts – the Addis Sheraton, with its ‘singing fountain’, is one of the most luxurious in all of Africa, yet you only need to travel a few streets away to find yourself among busy markets, dirt roads and the odd goat or two wandering the street. The optional city tour starts at 1pm and includes the National Museum, where you’ll find the remains of “Lucy’, and the Ethnographic Museum, set within the beautiful gardens of Haile Selassie’s former palace. In the evening you’ll have dinner at a local restaurant.

Day 2: Bahir Dar
Today we will take a spectacular flight to Bahir Dar. From the air we can gaze across the extraordinary nature of the Ethiopian Plateau, repeatedly cut by immensely deep gorges. Bahir Dar is a small but fast growing town on the southern shore of Lake Tana, the source of the Blue Nile. It has long attracted religious men and the area contains numerous churches and monasteries, many of them on the thirty or so islands of Lake Tana. This afternoon, board a sightseeing boat for a cruise around the lake. Covering over 3,500 square kilometres, this is Ethiopia’s largest lake and is home to 37 islands, 20 of which house some of Ethiopia’s most venerated monasteries. Many of these monasteries are believed to date back to the 13th and 14th centuries, and feature superb ecclesiastical art. Legend has it that the Ark of Covenant was hidden here for protection during the times when Muslim forces invaded the ancient capital Axum. Your boat trip will take you to the monastery of Ura-Kidane Mehret, which dates from between the 16th and 18th centuries. It is renowned for its collection of crosses and crowns, and its incredible painted walls that offer up a virtual ‘who’s who’ of Ethiopian saints. The boat returns to your hotel via the source of the ‘Blue’ section of the Nile.

Day 3: Bahir Dar
Head out to the Blue Nile Falls today. Located 32 kilometers south of Bahir Dar, the Blue Nile Falls measure over 400 metres wide and crash down 48 metres in full flood. These falls are known locally as Tis Isat (Smoking Water) and are a spectacular sight when the water’s high. New hydro-electrical plants and dams have somewhat impacted on their magnificence, but the sight is still a memorable one. You can take a longer scenic walk past the main viewpoint (1.5 kilometers) or a shorter walk to reach the foot of the falls. You will then cross the Nile River by boat to reach your vehicle. After a leisurely lunch back in Bahir Dar, perhaps visit the open air market or take a tuk-tuk up to the town viewpoint.

Day 4: Gondar
Head for the regal city of Gondar by travelling north around the edge of Lake Tana this morning, a drive that’ll take approximately 4.5 hours including photo stops. Gondar was the capital of Ethiopia through the 17th and 18th centuries, and is famed for its medieval castles and churches. This afternoon or tomorrow, there’s the option to visit the city’s most significant churches and castles either as part of a tour or unaccompanied. The city’s unique Royal Enclosure is a World Heritage site and home to dramatic, Emperor-built castles unlike any other in Africa. Spend the afternoon visiting these medieval castles and stop by the famous church of Debre Berhan Selassie, one of the finest in Ethiopia with walls and ceilings covered in stunning murals of angels.

Day 5: Gondar
Today you’ll have free time to explore the quiet streets of Gondar for yourself. Take a stroll to the markets, or otherwise perch up at the hotel by the pool. You’ll be heading into the mountains tomorrow so there’s nothing wrong with enjoying a little bit of luxury while you have it.

Day 6: Simien Mountains National Park / Debark
Depart Gondar early in the morning and head towards Debark and the Simien Mountain National Park. The remainder of the day is free to explore the spectacular mountain scenery including Ethiopia’s highest point – Ras Dejen (4550 metres). This area is home to much of Ethiopia’s wildlife, including the Gelada baboon, which are only found in Ethiopia and have a shaggy coat with a red patch on their chest, hence being known as the ‘bleeding heart baboon’. Once you pass the entrance to the park you’ll hike and drive up to Sankaber Camp before heading back to Debark for the evening.

Day 7: Aksum
Strap in for a long travel day up the winding road to Aksum. Though the journey will take approximately eight hours, you’ll cross the lowlands of the Simien Mountains and the Tekeze River gorge and the views will be absolutely spectacular. Aksum was once the capital of the Kingdom of Aksum, Africa’s oldest empire, which exsisted from around AD100 to AD900. It was at the centre of a trading route that stretched from Egypt all the way to India and grew to be one of the most powerful kingdoms in the ancient world.

Day 8: Aksum
Today is a free day with the option to tour the incredible historical sites of Aksum. Visit the stele fields, several tombs, the ruins of the Queen of Sheba’s palace and an archaeological museum. The field is home to over 100 stele – the largest one measuring 33 metres and weighing an incredible 517 tones. Stele (or monoliths) are carved from a single piece of granite, and are often elaborately decorated to resemble a multi-story house complete with windows, doors, locks and structural beams. Their scale reflects how important Axum once was, and they were probably transported by elephants from a nearby quarry. The mausoleums in this area include the tomb of the false door and also the tombs of King Kaleb and Gebre Meskel, while the archaeological museum houses fascinating displays. An unimposing building with a green picket fence is the St Mary of Zion Church, the first built in sub-Saharan Africa. This holds the crowns of various former Ethiopian emperors and is even said to house the most fabled biblical relic in history – the Ark of the Covenant. The afternoon is free for you to keep exploring – you might like to see some of the handcraft shops or take a walk out of Aksum for an hour or so to see Gobodera, the quarry place for the stele and rock lioness relief. If you take the option of visiting the Stele field & Archaeological museum & St Mary Zion church, castle church (men only) & museum yourself, rather than as part of the organised Historical Site tour, please note local guides are required for all groups. Rates are from 410 ETB for a group of 1-5, and up to 650 ETB for a group of 12.

Day 9: Mekele
In and around Mekele
Leave Axum for Mekele, looking across to see the spectacular Adwa Mountains and the battlefield of Adwa, where the Ethiopians defeated the Italians in 1896. Stop to visit the Pre-Christian Pagan Temple of Yeha before breaking for lunch at Adigrat. Yeha is though to have been Ethiopia’s first capital and the temple has been dated to around the 6th century BC. After lunch, drive to Enda Teka Tesfay and walk to the rock church of Medhane Alem Adi Kesho, approximately 4 hours (or 8 hours total for the day). There are numerous magnificent rock-hewn churches in the Tigray region, but Medhane Alem Adi Kesho is one of the best in terms of architectural quality. The outside is roughly carved, but the interior ceiling is elaborately sculpted. Spend the night in nearby Mekele.

Day 10: Lalibela
In and around Lalibela
Start the long journey to Lalibela early in the morning on a smooth paved road and, after a couple of hours, reach the spectacular mountain range of Amba Alaje. Continue through green valleys and flat plains before turning west towards Lalibela at Woldia (approximately 5 hours). The road after Woldia offers one of the most scenic routes in the country. It involves climbing on winding roads along steep hills and evergreen lush valleys up to the Delanta Plateau (3,500 metres), then contouring around the valley for a couple of hours, before arriving at Lalibela in the late afternoon (approximately 6 hours). Despite the town of Lalibela being isolated in the Lasta Mountains at 2,630 metres above sea level, it is still the home of Ethiopia’s top sight, and one of the world’s greatest historical and religious sites.

Day 11: Lalibela
Today you’ll use the morning and afternoon to visit Lalibela’s amazing churches, which look like they’ve been dropped down from the sky. Between 1137 and 1270, several astounding rock-hewn churches were constructed in Lalibela; astonishing because most are not built from carved freestanding rocks, but instead created from huge single blocks of stone unearthed by the digging of enormous pits. The Northern Group contains seven churches, a tomb, a chapel and a sunken chapel. At the centre of the group is Bet Medhane Alem, measuring 33.5 metres by 23.5 metres and said to be the largest rock-hewn church in the world. A tunnel connects three of the churches in a courtyard to the east, whilst another tunnel connects two other churches to the west of Bet Medhane Alem. However it is Bet Giyorgis (St George’s), carved in the form of a Greek cross and lying slightly apart from the main northern cluster, which is the most famous and frequently photographed. This church is exceptionally well-preserved and is probably the most visually perfect. The Eastern group of five churches includes the only hypogeous church, where only the roof remains attached to the overhead rock.

Day 12: Lalibela
This morning we trek to the rock church of Asheten Mariam, which sits on the 3,150-metre-high Abune Josef mountain that overlooks Lalibela. You will climb for 2.5 hours to the summit, where the church is carved out of a cleft into the cliff face. The monastery houses ancient parchments and crosses, but the real treasure is the setting and the view. Descend the mountain and return to the hotel for lunch. This afternoon is free to relax or continue exporing this fascinating town. This evening you will enjoy a special dinner at Ben Ababa open air restaurant.

Day 13: Lalibela
This trip comes to an end today after breakfast. Flight back home.

– Insurance . Travel insurance is required for this tour. Please make sure you are adequately covered.
– International flights are not included 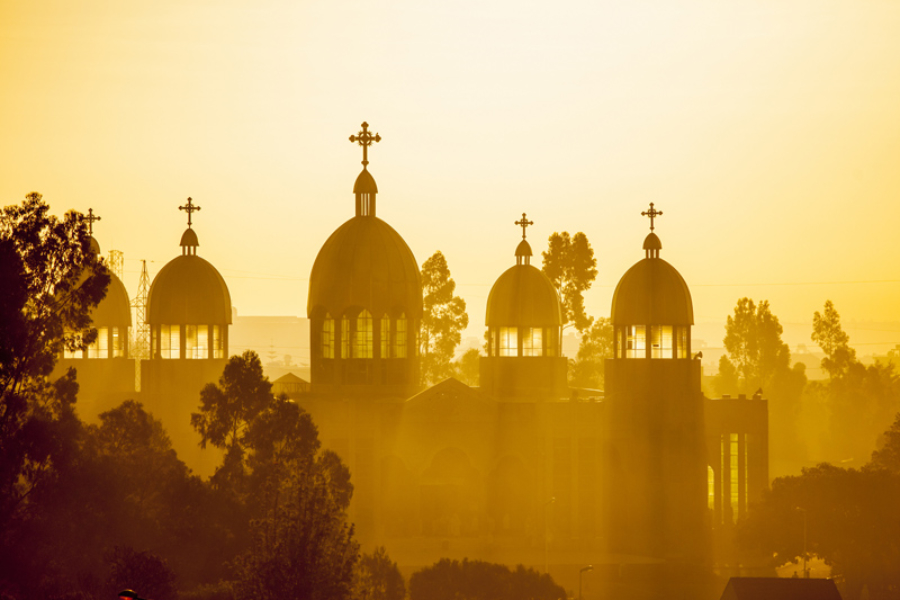 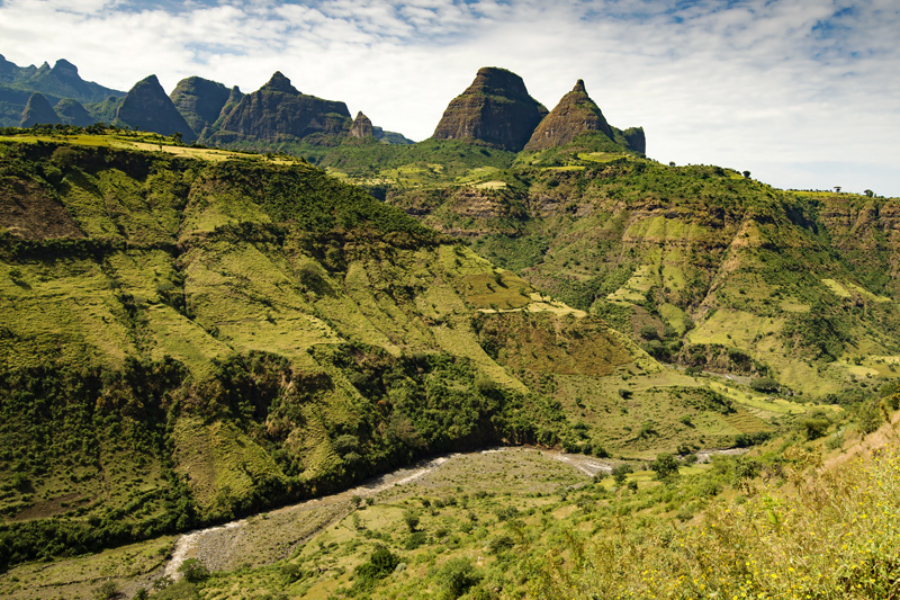 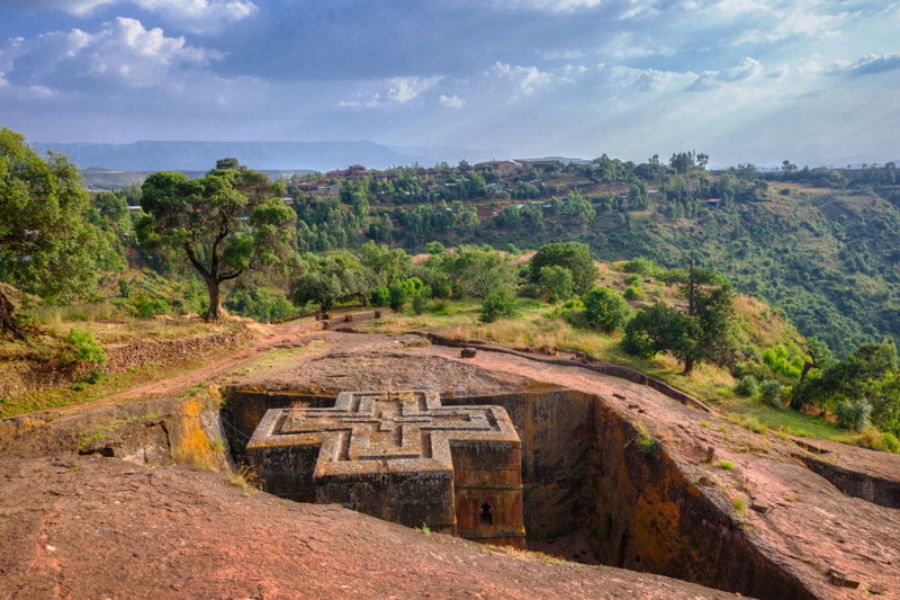 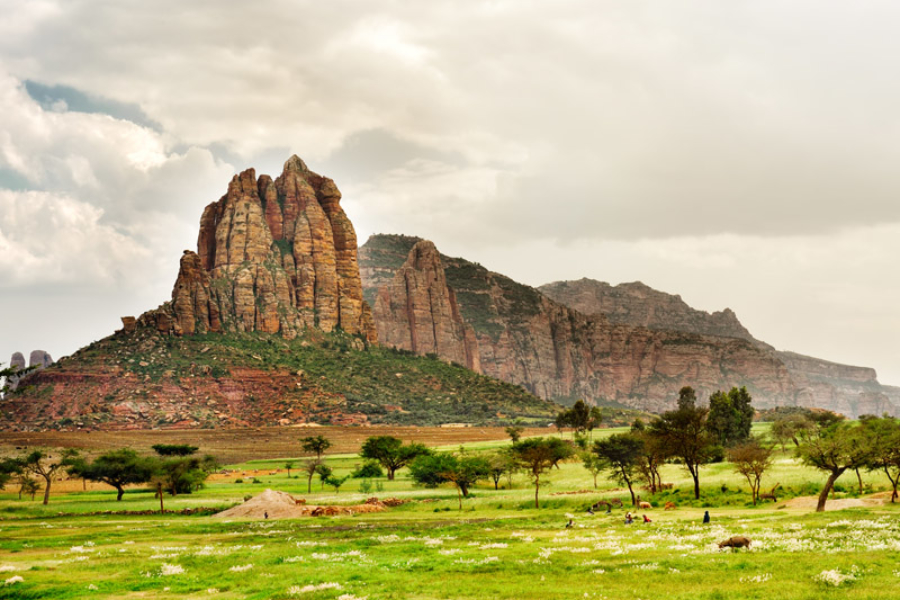 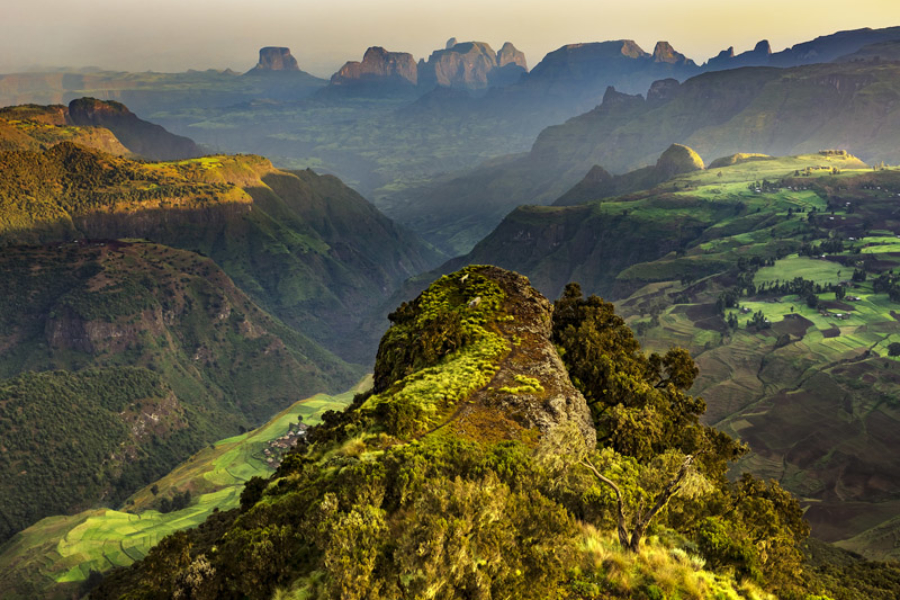 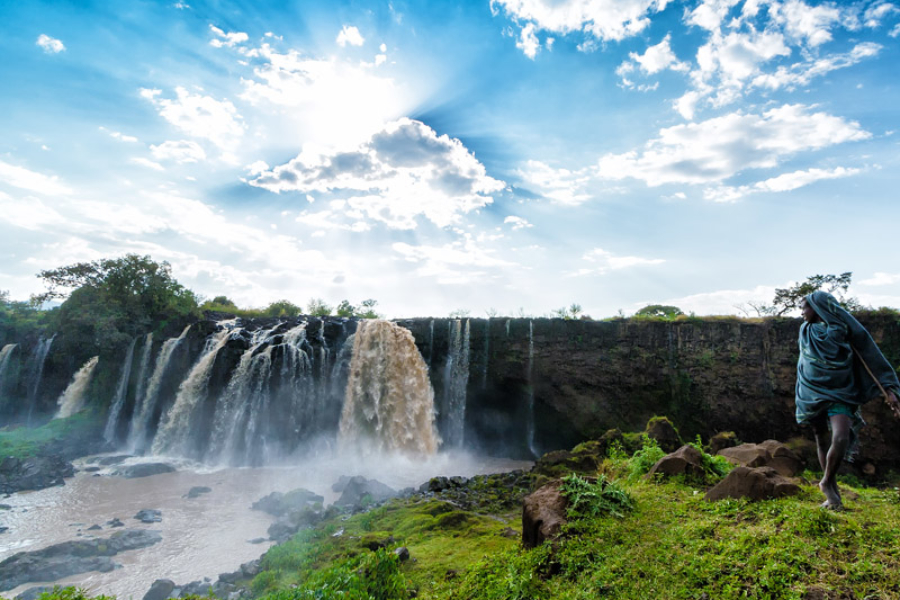 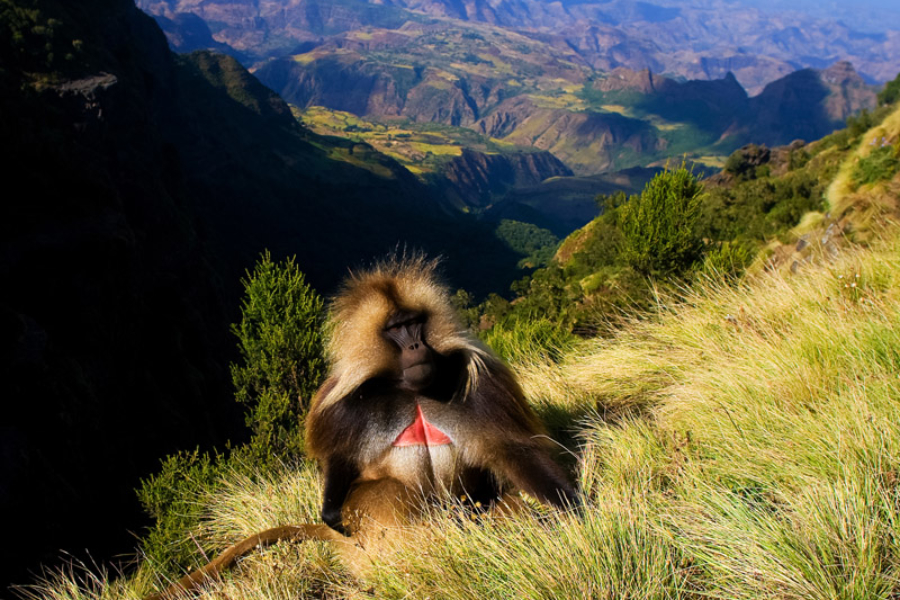